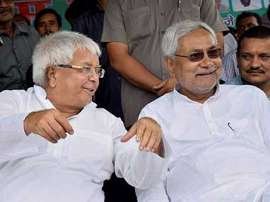 Jammu:
Hours after Nitish Kumar described RSS as the BJP’s “supreme court”, party general secretary Ram Madhav on Wednesday hit back and alleged that the JD(U) leader took orders and permission from Sonia Gandhi and Lalu Yadav and they were his “two supreme courts”.

“I was listening to the press conference of Nitish Kumar during the day. He was telling that RSS is BJP’s supreme court. I want to ask Nitish which is his supreme court?

“As far as his statement is concerned, it looked he has two supreme courts– one Lalu Prasad and second Sonia Gandhi– and the Congress from whom he takes orders and permission,” Madhav told reporters in Jammu.

Referring to the recent row surrounding Mohan Bhagwat’s comment on reservation, Madhav said the RSS chief was not against the existing reservation.

“As far as RSS is concerned, yesterday RSS has made it clear that their chief Bhagwat ji has not made any comment on the existing reservation system.”

“Nitish Kumar should first of all decide what is his maha gathbandan (coalition) partner Congress party’s stand on that,” he said.

“RSS has not said anything like that and as far as the BJP is concerned, we said yesterday repeatedly that we want the present reservation system to continue until the objective is achieved.”

“Objective mainly is what BR Ambedkar had envisaged when he introduced the reservation system. The benefit should reach to all sections, all beneficiaries, the last man in the beneficiary community that should be the effort. What is wrong in that?” he said.

Taking a dig at the Bihar CM, Madhav asked,”Is Lalu Prasad his supreme court? He (Nitish) has stated in the press conference that he had permission to announce the list, he had the permission of Lalu Prasad.”

The BJP leader told reporters that he (Nitish) takes “permissions and orders from Lalu Prasad”.

“He takes permission and orders from Sonia Gandhi and Congress party which is the other supreme court,” Madhav said, adding,”Congress leaders are publicly stating that the reservations have to be on economic basis. They are wanting to change the existing reservation system.”