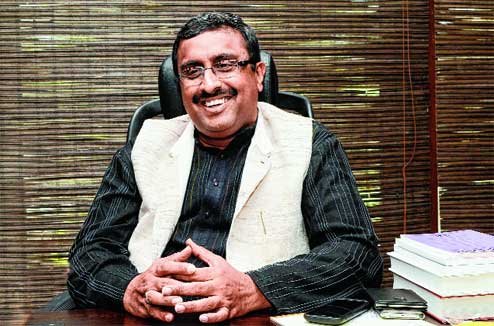 Ram Madhav, 51, a BJP general secretary, is the party’s prabhari (minder) for Assam.

Madhav, who was a Rashtriya Swayamsevak Sangh pracharak before he was “loaned” to the BJP like Prime Minister Narendra Modi was decades ago, quickly earned his spurs in conducting realpolitik when he swung the coalition arrangement with the People’s Democratic Party in Jammu and Kashmir for the BJP.

Therefore, when BJP president Amit Shah mandated him to look after Assam, his party colleagues were not surprised. Because among the four states that poll in mid-2016, Assam, West Bengal, Tamil Nadu and Kerala, the BJP has the highest stakes in the northeastern state.

Madhav steps into Assam at a critical juncture when the BJP hopes to reap the profits of a perceived anti-incumbency tide against the Congress dispensation and fill in the vacuum caused by a debilitated AGP. Simultaneously, Madhav is aware of the enormity of fulfilling the mandate Shah has assigned him, the complexities in Assam’s socio-political mosaic and the difficulties in picking up the pieces and re-casting the patterns to fit into the BJP’s outlook for the state.

He spoke to Radhika Ramaseshan on the challenges ahead of him at his office of India Foundation, a think tank of which he is a director.

Excerpts from the interview

Q. Months into your assignment, how does Assam look like for the BJP?

A. We are seriously trying to strengthen the party in the state. The state has been under the Congress’s misrule for 15 years and it is time that Assam is freed from the Congress if it is to be saved. A totally corrupt and ineffective government has been in place for 15 years. The human indices reflect the state of disorder in literacy, health and rural infrastructure. Every data shows Assam is far behind the national average of these indices.
I was in Guwahati a few days back. It rained for only an hour. A senior journalist was supposed to meet me but he called to say he could not make it because there was knee-deep water around his house. I assume he lived in a decent locality. There is no dearth of central funds. A lot of money pours into Assam. Disaster relief funds to the tune of Rs 1,500 crore are lying unused with the state government. The chief minister (Tarun Gogoi) has admitted this. All because there is no governance, no administration.

Q. But the BJP’s strategy, or what has come out of it so far, is apparently underpinned on weaning away legislators from the Congress. Is this the best of strategies?

A. I do not discuss strategies with the media. The fact is several important people in the Congress are fed up with what is happening in the party and the government. To say we are engineering splits is incorrect. They do not want to continue in a party that is doing nothing in Assam. Tarun Gogoi is facing a total revolt within his party.

Q. After Himanta Biswa Sarma, there were nine other Congress MLAs who wanted to join the BJP. To date, you haven’t taken a decision on these hopefuls.

A. These MLAs met with our leadership to convey that they want the development of Assam. They are inspired by PM Modiji’s leadership and think that Assam will benefit from his leadership. The issue of them joining the BJP was not discussed. A decision will be taken at an appropriate time.

Q. Do you see Badruddin Ajmal’s All India United Democratic Front doing for you in Assam what the BJP hopes Asaduddin Owaisi’s MIM will in Bihar, that is, fracture the minority votes?

A. There is, in fact, a clandestine relationship between the parties of Ajmal and Gogoi but we know how to tackle these things. This relationship is to the detriment of the state. We (in the BJP) do not speak of minority and majority.

A government has to take care of everybody. Assam’s interests lie in ensuring that its people have a larger say in running the state.

The big question is whether the state will be run by its own people or by the champions of infiltrators.

Q. This infiltration issue is an ancient one. But no party or government, in the state or Centre, has got a fix on it. There’s a danger that if the government starts tracking down the so-called infiltrators, bona fide citizens get harassed.

A. The government of India will do everything to see that genuine citizens will not be harassed. But we will not spare the infiltrators either.

Q. The Centre recently decided to allow minorities from Bangladesh and Pakistan to stay on in India indefinitely without documents. The assumption obviously is they are Hindus. So the BJP is also cultivating its own vote banks like the Congress allegedly did by encouraging infiltrators in the past.

A. There is a huge misinformation campaign. I must tell you that the Hindus from Bangladesh that come into Assam are mostly from Sylhet district, which was a part of Assam before Partition. They mostly settle in the Barak Valley. They are a part and parcel of Assam’s life. Hindus and other minorities from Bangladesh also come into West Bengal and Bihar and not just into Assam alone. They fan out into other parts like Delhi and Mumbai. There is a difference between them and the illegal migrants, who supposedly come here to earn money. Now these illegal migrants continue to live permanently in the tribal areas. Large tribal tracts are occupied by them in the areas that belong to the Bodos and the Misings. Even in Karbi Anglong. These infiltrators have reclaimed large riverbeds on the Brahmaputra, causing floods. So they are an economic and ecological threat to Assam. We are explaining all this and letting people know that the home ministry’s decision is not against Assam’s interest.
We are saying that Ajmal and Gogoi are hand in glove with the infiltrators and Assam must be saved from all three of them. This is our major issue.

Q. What about the Land Boundary Agreement clinched between India and Bangladesh? That triggered some resentment in the Assam BJP leaders.

A. Look, the agreement has clearly demarcated borders between India and Bangladesh. Very soon, the government of India will make arrangements to seal the borders. The home ministry is taking steps to ensure that the border will be non-porous. Our border security forces will take care to see that the arrangements are not breached.

Q. How do you look at the AGP that was once the second pole of Assam politics?

A. The AGP must decide which side to take, whether they will side with the Congress-infiltrators nexus.

Q. Will Sarma be your chief ministerial face? Or will the elections be fought under Narendra Modi’s leadership like in Bihar?

A. Right now we are working to strengthen our party, right down to the booth level. A call on who the chief minister will be will be taken closer to the elections.