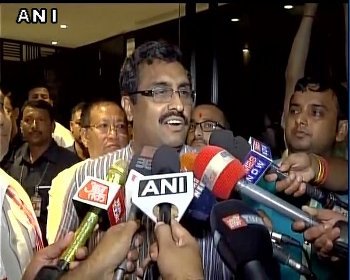 Guwahati, May 24 (ANI): In an attempt to further corner the Congress Party in the north-eastern region, the Bharatiya Janata Party (BJP), buoyed by its victory in Assam, announced the formation of North East Democratic Alliance (NEDA) on Tuesday.

The decision was taken after the chief ministers of Assam, Arunachal Pradesh, Nagaland and Sikkim had a meeting with BJP president Amit Shah, and general secretary Ram Madhav.

“A very important decision was taken in this meeting; we have decided to come together and form a new alliance and have named it ‘North East Democratic Alliance’ (NEDA). The NEDA will be an alliance of non-Congress parties in the north-eastern states,” Madhav told the media here.

Stating that charter and the statement of objectives of this new alliance will be drafted very soon, Madhav said the four chief ministers and the BJP leadership have decided to designate Hemant Biswas Sharma as the convener of NEDA.

“Today, we are in power in four states, and there are four other states in the region, where there are also important non-Congress parties. All these parties will come together and will become the constituents of NEDA.

The NEDA will be a constituent of National Democratic Alliance ( NDA),” he added.

Madhav further said the very purpose of this arrangement (forming an alliance) is to ensure greater development of the region through mutual cooperation within the region as well as the cooperation between the regional political parties and the Centre led by Prime Minister Narendra Modi.

“This alliance will be new big political force in the region, it is a very important development for the region, all the non congress parties are coming together with the sole objective of developing north east and addressing all the problems faced by the states, in a better coordination with the Centre,” he added.

Assam Chief Minister Sarbanand Sonowal said the decision of froming NEDA is a great decision for overall growth of the north east.

“We are sure that with this political purpose the North East will prosper in a bigger way,” he said. (ANI)