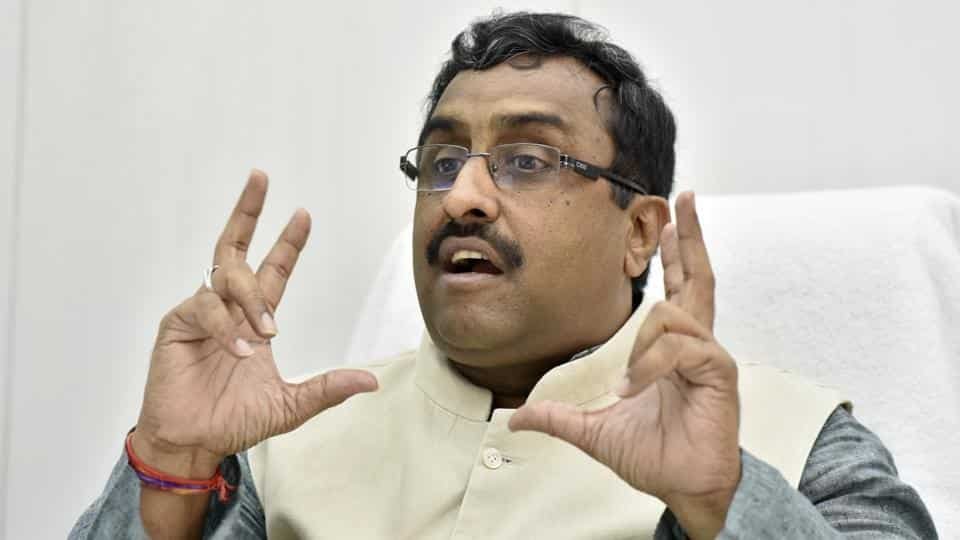 Ram Madhav, the Bharatiya Janata Party (BJP) general secretary, who oversees the party’s units in Jammu and Kashmir and the Northeastern states, said in an interview to Smriti Kak Ramachandran that BJP-led government at Centre is committed to eliminating terrorism from Kashmir and has maintained a consistent stand over it unlike Peoples Democratic Party and National Conference that change their stance depending on whether they are in or out of power. Edited excerpts:

2018 was considered to be the bloodiest in Kashmir. There was no political consensus and an increase in public support for militants. What is the BJP government’s plan now?

I take objection to describing it as the bloodiest year. It was a successful campaign against terrorism in Kashmir, not just in the year that has passed, but in the last several years; we have been able to successfully neutralise a large number of terror modules. This is a major success in the fight against terror. Barring a few districts in south Kashmir, the Valley has largely been peaceful. Normal life of people, developmental activity of the government are going on unhindered. Things have improved and nobody should doubt our determination to eliminate the last terrorist in the Valley. But at the same time, we are focusing in a big way to undertake developmental activity to ensure that the democracy returns in the state.

Is your party ready for elections in the state where results of the local body elections show BJP’s dipping popularity?

If local body polls are any indication, we have done well in the Valley also. It is another matter that two regional parties (PDP and NC) developed cold feet and decided to boycott municipal polls. Both Congress and BJP contested and won seats. We have been able to conclude the panchayat polls also. As far as the assembly or general polls are concerned, we are hoping that they will take place over the next few months.

Is BJP looking for another ally in the state?

Whenever the assembly polls are announced, BJP will contest all seats in Jammu and as many as possible in Kashmir. We are also keen that a good number of parties or individuals who are committed to peace, development and constitutional governance should be encouraged.

In three years, your equation with PDP went from a “meeting of the North Pole and South Pole” to “untenable”. In hindsight, was it a bad decision to ally with it?

There was a peculiar mandate in 2015, forcing an unusual arrangement in the state. We tried our best to deliver through a totally different kind of alliance. When it was not working, we decided to quit. Now one thing is clear — when the decision was taken, it was taken in prudence, after consultations.

So no pre-poll talks?

Your critics say BJP has failed to carry forward the Vajpayee formula for winning over Kashmiris. Alienation has increased and there is a spurt in locals taking up arms.

The sense of alienation is a euphemism for Kashmir. When was it not there in last 30 years? Look at the scenario today, when great regional parties did not have the courage to reject the diktats of the terrorists and participate in the polls at the local level, young men came forward, contested polls on BJP ticket and… won. People also contested on Congress and People’s Conference tickets, and we are still talking about alienation. There is a section of people deliberately cultivated by certain political elements. But largely Kashmiris want peace, development and constitutional governance.

Your former ally Mehbooba Mufti has suggested dialogue with local militants, describing them as “sons of soil”.

PDP was in alliance with BJP for three years. Together, we launched a massive campaign against terrorists and militants and today, for her own politics, if Mehbooba-ji wants to return to the politics of separatism and championing the cause of militants and their cohorts, it shows her own political double standards.When in power, we were consistent. We never said the militants are our in-laws, we went after them and we will go after them when we return to power. This is our firm decision, peace must return to the Valley. But these parties [NC and PDP] when they are in power, they do something and when out of power, they speak just the opposite.

The other region you are in charge of, the Northeast, is also on the boil over the Citizenship Bill.

Northeast is not on the boil. There are sporadic incidents of protests and violence, mostly because of the misinformation that is being spread through social media and a few political outfits in the region. We are in power in six of the seven states. Through these governments we are telling people the truth about the bill, which is not limited to any region or state.

Allies of the BJP have begun to step up pressure…

Whenever polls are around, allies will try to have good political negotiations with the major alliance partner. We will listen to their concerns and follow coalition dharma.

How will BJP take on the alliance between BSP and SP in UP?

… it is good, it will now be face-off. It is a battle for 50% [of the votes in the state] and we are ready to face this challenge where we have to get 51%. We now have to take on only one opposition (party).

What about BJP’s southern march? Will there be one in Tamil Nadu with the AIADMK?

In Karnataka, we have a good presence, we are confident of retaining our strength if not increasing it; in Tamil Nadu, Kerala, Andhra Pradesh and Telengana, we have to increase our strength, and since we are not very strong, we are open to alliances with other parties.