‘We are certainly disappointed by our inability to win a single seat in the valley… We will analyse what led to this kind of dismal — in terms of seats — non-performance by the BJP.’

‘I certainly don’t want to attribute any religious or so-called communal reasons for it; for the simple reason, that even in Ladakh, a Buddhist majority area, we failed to win seats.’

BJP General Secretary Ram Madhav, the man in charge of the party’s election campaign in J&K, discusses the verdict with Sheela Bhatt/Rediff.com 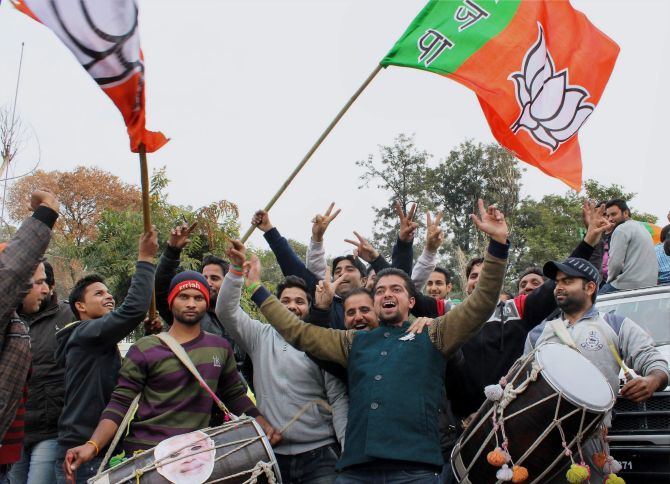 Ram Madhav, Bharatiya Janata Party general secretary and the man in charge of its election campaign in Jammu and Kashmir has mixed feelings about the election results.

The BJP won 25 seats — all in the Jammu region — recording its best performance in the state.

It did not win a single seat in the Kashmir valley and Ladakh.

Madhav — who was deputed from the Rashtriya Swayamsevak Sangh to the BJP earlier this year — feels party cadres worked hard, the BJP played safe on political issues and even underplayed its vehement stand on the abolition of Article 370 of the Constitution which mandates a special status for Jammu and Kashmir.

The outgoing National Conference-Congress government too had lost credibility and the ground was ready for the BJP to march into India’s only Muslim majority state.

The security forces had a firm grip on the law and order situation in Kashmir, which had not occurred before an election. Moreover, the BJP had a leader in Prime Minister Narendra Modi who could communicate and manipulate one message to Jammu and another message differently to Kashmir.

Under these circumstances, the BJP dramatically improved its electoral position in the sensitive state, but the clear verdict against the party in the Kashmir valley has dampened Madhav’s mood.

In between dozens of television appearances, Ram Madhav spoke to Sheela Bhatt/Rediff.com about the verdict in Jammu and Kashmir.

A historic day for you and the BJP. What is your take?

This is the highest ever for the BJP in the history of elections in this state.

We offer this victory as a tribute to (the founder of the Jan Sangh, the BJP’s political parent) Dr Syama Prasad Mukherjee’s cherished memory (Dr Mukherjee died in Kashmir in June 1953; the Jan Sangh alleged he was not provided proper medical treatment by the state government after he was arrested).

It is a very significant victory for us because we have become a very powerful and important force in this state today.

And keeping the spirit of the mandate in view, we are trying to give a stable and development-oriented government for the people of the state; we are exploring the available options.

You will agree that Mission 44 turned out to be hype.

When we said Mission 44+; in fact, I have said in several interviews that our Mission 44+ was to say that the BJP along with certain like-minded people will try to form a government.

If we succeed in that means we have succeeded in our Mission 44+.

What is the meaning of Mission 44+? It is to give a stable and good government to Jammu and Kashmir. That was our commitment to the people of J&K.

One of the biggest setbacks for you is not opening your account in the Kashmir valley. Observers feel the way Hindu fringe elements have impacted the rest of India, it has echoed in the valley.

We are certainly disappointed by our inability to win a single seat in the valley. We never thought we would win too many seats. We sincerely tried to win a couple of seats, but we could not succeed.

We have to analyse, try and understand the reasons behind our failure to win any seats in the valley. I don’t want to jump to any conclusions in haste. We will analyse what led to this kind of dismal — in terms of seats — non-performance by the BJP.

I certainly don’t want to attribute any religious or so-called communal reasons for it; for the simple reason, that even in Ladakh, a Buddhist majority area, we failed to win seats.

Then very interestingly in the Jammu region, a couple of Muslim candidates put up by the BJP won elections. If what you are saying is correct, then we should have lost the rest of the seats too. No Muslim candidates would have won any seats Jammu.

So, probably for our less-than-satisfactory performance in Ladakh and in Kashmir, we need to analyse a bit more. I want to add one more point this: People such as former separatist Sajjad Lone, who have openly identified themselves with Modiji, won handsomely in the valley.

Sajjad’s party (the People’s Conference) won two seats — this is the first time they have done so. This goes on to prove that the issues raked up in the rest of the country were certainly not the major reasons for such a performance in the valley.

You know Kashmir has historic baggage. It is a Muslim-majority state. These two facts make the BJP’s position quite sensitive. Your dominant presence in the legislative assembly makes a very different kind of a beginning.

If you are you aware of this responsibility, then how do you look forward to it? When we talk of Article 370 and the unresolved aspects of Kashmir, how do you look at this bigger picture?

It is certainly a historic election. People have given a fragmented mandate. We went to the people with the single point agenda of development. We secured the highest number of votes in this election for that.

So it is our and the other two main parties’ responsibility — the Peoples Democratic Party and the National Conference — to make sure that a stable, development-oriented government is established in the state. We have to work towards that. Image: Winning BJP candidate Sham Choudhary with his supporters flash victory signs as they celebrate his win in the state assembly election in Jammu.

This election saw polarisation of voters on the lines of religion. That is why you won in Jammu where the majority of Hindus live; and lost in the valley. Don’t you think it is not a good situation in a state such as J&K where the divide between Jammu and Kashmir has actually increased during and after the election?

Just because we could not win a seat in the valley, you conclude that it was a polarised election. To that, I would say your assessment is wrong. It is a totally fragmented result.

Do you think that Kashmiris did not vote for the BJP because of the fear of the possibility of a first Hindu chief minister since Independence?

Now remember the Congress won 4 or 5 seats in Kashmir. We always maintained throughout the campaign that the chief minister of the seat would be a democratically-elected person. But we could not open our account.

So who has won the mandate to lead the government?

Nobody. That is why the major parties have a responsibility to come together, understand that this verdict is fragmented, and have an arrangement where they could provide a stable government. We are ready to explore those options.

Do you agree that it is not prudent and wise to form a government with the help of the National Conference which was rejected in Kashmir, a particularly sensitive terrain?

No, you see, in that case they (the people) have not given any mandate to the PDP either — they got only 25 out of 46 seats in the valley; whereas in Jammu, we secured 25 out of 37.

People of the valley gave a totally fragmented mandate. People of Jammu more or less gave the larger mandate to the BJP.

I can’t say anything now, but we are definitely exploring our options to give a good government to the people.

How many options do you have before you?

There are two major political parties — the National Conference and the PDP; if we want to form a stable government, we have to explore the option of joining hands with either.

When you emphasise on a stable government, the same will be with the PDP and not with the National Conference because…

A stable government doesn’t depend only on numbers. Numbers are any way required to have a majority.

There are number of other issues involved such as coalition and comfort in working together. Image: Winning candidate Rajiv Sharma with his supporters in Jammu.

How will you remember this election?

This would a very memorable election for me personally. I spent a lot of time in Jammu and Srinagar. I am a little disappointed that despite giving our best, we could not open our account in Srinagar. We very much wanted to do so.

Why did you fail in the Kashmir valley?

We only got the results, and we were more or less certain about one or two seats. But you know, after all, the verdict of the people is final, and I salute them for it.

That disappointment aside, I have seen tremendous support for Modiji in the valley, especially youth who would come to my hotel room at night to discuss. They used to ask this question straight to my face: ‘Why should we, the youth of Kashmir, support the BJP?’

They would say ‘Give us one reason and we will be ready.’ They wanted to know what they would get by supporting the BJP because they were fed up with so much of negative campaigning about the party. They were influenced by Modiji‘s development-centric policies.

Don’t you think the current controversies in the country owing to members of the RSS is not a good omen for the BJP’s stance in Kashmir?

I already answered that question. We have to analyse the reasons for our relatively unsatisfactory performance in the valley. We wanted to win a few seats, but then we also have to analyse why we could not win any seat in Ladakh, where we were expecting at least one or two seats.

I cannot attribute this to some incident in Uttar Pradesh or elsewhere, and say it is someone else’s responsibility. I take the responsibility, but we will analyse the situation.

So, will Kashmir get a stable government?

I think so. We will try our best to ensure that Kashmir gets a stable and development-centric government.

Even if you form the government, issues like Article 370 and conversions will crop up and shake the coalition government in Kashmir.

You in the media are obsessed with this issue. I know issues matter to the people of Kashmir because I have spent so much time in the valley and in Jammu.

We have offered to the people of the state that we are ready to give a government like that.

Are we going to see a BJP chief minister soon?

We can only answer this in a couple of days. But let me tell you, the BJP is certainly keeping its options open; we will explore all available options to be a part of the process of government formation there.

I am personally quite hopeful that the BJP will play an important role in the next government that is going to be formed in Jammu and Kashmir.