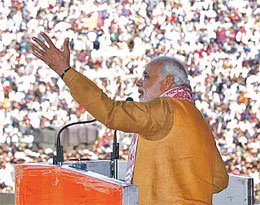 GUWAHATI, Nov 30 – Prime Minister Narendra Modi on Sunday gave strong indication that his government will go ahead with the land swap deal with Bangladesh, while addressing a workers’ meet of the party held at the Sarusajai Stadium here.

Modi, who was extended a warm welcome by the State BJP, said that although this step might seem that Assam is losing out at present and hence not look agreeable, it will in the long run emerge in favour of the State as it will provide a permanent solution to the vexed issue of infiltration.

“I am aware about the problems of Assam. I assure the people of Assam that there will be no compromise on the matter of Assam’s security. I know about the sentiment of the people in regard to the land swapping deal and I promise to fulfil all the aspirations of the people of Assam, and assure you that Assam will gain in the long run as all arrangements will be made to protect the rights of the state,” said Modi.

The Prime Minister also made it clear that all roads that encourage infiltration and the other divisive forces to destabilize the state will be closed and the laws will be more stringent to punish them.

On the other hand, Modi said that Assam and the entire North East has importance for the Central Government and in the coming days the region will be propelled on the fast track route of development.

“Development of the region has topmost priority for us. We are equally keen to generate more employment opportunities for the youth of the region,” said Modi.

Referring to the ambitious Jan Dhan Yojna, the Prime Minister said his government will do everything for the benefit of the weaker and marginalized section of society and that this scheme has opened the doors of the banks to the poor people.

Observing on the turnout of BJP workers for today’s meet, Modi said that this sea of humanity reflected the strength of the saffron party that does not do politics on the basis of communalism, casteism and regionalism.

“BJP’s politics is based on nationalism and we will take the country ahead on this pillar of strength,” stressed the Prime Minister, adding that it is the BJP that had the courage and the vision to contest election on the singular issue of development. He further said that the development mantra of the BJP has compelled other political parties to give prominence to this issue.

Earlier, welcoming the Prime Minister, State BJP president Siddhartha Bhattacharya said that the occasion was significant for the party and that the Prime Minister has succeeded in inspiring the people of Assam to dream about a better future. Union Minister Sarbananda Sonowal, who was also present at the meet, said that all aspirations of the people of Assam, including a solution to the foreigners issue, will be addressed by the Modi government.

“The issues of Assam like NRC update, ST status to the six communities, border sealing, protection of one horned rhino, tackling flood and erosion, etc, will be resolved,” announced Sonowal, calling upon the people to unite for a change in the Assembly election.

The BJP’s national general secretary Ram Madhav, in his speech asserted that the next government in Assam will be formed by the BJP. “The Congress will be shown the exit door,” he said.

The meet was attended by the party observer for Assam Dr Mahendra Singh, MPs Bijoya Chakravorty, Rajen Gohain, Ramen Deka, Rameswar Teli, and many other senior leaders of the party. Union Minister Kiren Rijiju, too, was present.