SRINAGAR: The BJP on Thursday said its government at the Centre wants friendly relations with Pakistan, but there was no reciprocation to the peace overtures from the other side.

“We want friendly relations with all the neighbouring countries including Pakistan. Over the last six months, we have tried our best to strengthen relations with them, but when there is no such response from the other side, the friendship cannot be strengthened, which is visible from the attack that happened today on the border. There are certain conditions and they have to cooperate,” party general secretary Ram Madhav told reporters here.

Madhav said Prime Minister Narendra Modi was willing to open direct road connectivity between the Punjabs on the two sides of India-Pakistan border.

“Modi has said ‘why not make South Asia a developmental model’. He is willing to open direct road connectivity between India and Pakistan Punjabs for better economic avenues. He has even said that there should be direct trade between India-Pakistan rather than carrying goods via Dubai to Pakistan,” he said. BJP genral secretary Ram Madhav (2nd from right) with Congress leaders who joined the BJP at a function in Srinagar, on November 11, 2014.

The BJP leader said his party was open to a post-poll alliance in Jammu & Kashmir in case it fell short of getting an outright majority to form a government on its own.

“We are sure we will form the government on our own. In case we fall short of majority, we will take support from our friends to form the next government in the state,” he said.

Madhav said the political parties of the state lack a proper policy for the development of the state.

“We want to build J&K jointly so that we can bring the peace and prosperity to the state. The political parties here have nothing new to offer and lack vision for development of the state,” he said.

Terming the ruling National Conference (NC) manifesto for the assembly polls a “carbon copy” of the earlier manifestos, the BJP leader said, “This big party has repeated the manifesto of 2008 Assembly elections. They have failed to deliver what they had promised in 2008.”

On the reports of the party skipping the contentious issue of Article 370 in its manifesto, Madhav said “our primary focus is development of the state to rid the people of the poverty”.

“Modi has a vision for the development of Jammu & Kashmir. That is the reason that party released vision document instead of manifesto,” he said.

Madhav said the party, if voted to power, would focus on job creation, development of industries, and turning Srinagar into a tourist city. 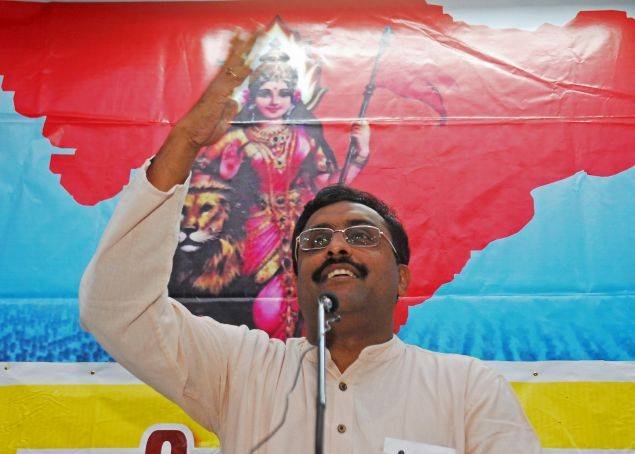 “Every citizen of the state would be equal partner for the development of the state. Modi will develop the state with the support of the people here. Modi is committed to introduce a quality higher education, including medical and engineering so that students do not need to move outside,” he said.

He appealed to the people to help the BJP in strengthening its base in the state.

He alleged the political parties in the state were seeking rehabilitation of the flood victims only for their political gains.

“Had flood hit after the elections, nobody would have been talking about the flood victims,” he said.