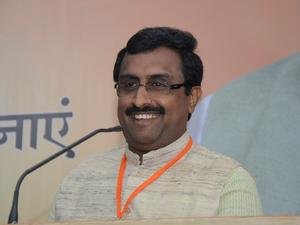 At a time when the Modi government has been accused of following an RSS agenda on meat bans and takeover of institutions, the key link between the Sangh Parivar and the government, BJP general secretary Ram Madhav tells TOI’s Sagarika Ghose that the RSS is an important voice but does not dictate to the government.

Is the RSS taking over the cultural and educational functions of this government?

That’s unfair and untrue. The culture department and education department are part of the government run by Modiji. There are people who have close links with RSS, that’s known to everyone, but the policies and programes are guided by the cabinet and PM.

The Executive Commitee of the NMML had approved of Mahesh Rangarajan’s continuance at NMML but apparently orders came from Nagpur?

Rangarajan in his own wisdom decided to resign and has done the right thing. The way his appointment happened was against the rules. That’s probably why he thought rather than becoming a controversial person, I should resign. He did the right thing.

But the timing was right after the government-RSS meet? Was it orders from Nagpur?

Had it been orders from Nagpur it would have happened on Day 1, would it not have? The government went into the details and has taken a decision on it. In fact the decision to quit was taken by Dr Rangarajan himself. He could have continued but he thought it fit to resign. His decision was appropriate.

Are you concerned about NMML’s association with the Gandhi family?

There are many institutions run on money spent by government and on the money of the taxpayer. Those institutions are answerable to the whole country, they cannot be pocket boroughs of any one family. We are not trying to pursue a narrow agenda of erasing anyone’s name. If somebody is great, nobody can erase their memory, after all history is something that people cherish, no government or institution can erase history. We are trying to show the entire gamut of history not just one part or one family.

Are the various bans on meat, beef, inspired by the RSS agenda?

Meat ban during certain religion occasions exist in large number of states. The Akhilesh Yadav government in UP has also ordered meat shops to close on the day of the Jain festival. There is no extraneous organisation here, it’s a decision taken by state governments. Its not only the BJP governments that have banned, there’s a ban in UP also a similar ban in Sikkim. Many governments take decisions based on local social and cultural reasons. The Congress imposed prohibition in Gujarat.

But aren’t these bans an infringement of individual freedoms?

Such questions must be raised before the courts, and as we see the HC has given a judgement as has the Supreme Court. But why try to implicate other people about a government decision? If there are such orders, discuss it, take it to appropriate authorities. The SC is the final word. There’s prohibition in Gujarat, there was a ban on religious conversions in 5 states imposed by Congress governments Why drag other institutions into government decisions?

It’s not because of RSS pressure?

Aren’t dietary choices part of the sangh’s notion of culture?

Look, on cultural dietary choices a number of people have spoken. Since Mahatma Gandhi’s time there’s been a ban on gau-hatya, it’s not RSS specific. There’s a Directive Principle on it. People have the right to speak against beef slaughter. Gandhiji talked of the banning of cow slaughter for social and economic reasons.

So its not part of the RSS’s cultural agenda?

Was it right for the Culture Minister to say inspite of being a Muslim Kalam was a patriot?

I have not heard that statement first hand, I don’t think he meant anything bad. He probably said APJ Abdul Kalam sahab was a thorough patriot who loved this land. Beyond that please ask the minister.

For the last 60 years so many roads have been renamed. So many British roads were re-named and memorials removed. How many places were named after the Gandhi family, Indira Gandhi, Rajiv Gandhi, Jawaharlal Nehru?
Wasn’t there an agenda there? How many projects are named for the Gandhi family? There was no RSS interference on Aurangzeb Road. The suggestion came from a Canada- based scholar called Tarek Fatah, who wrote to the PM saying why continue with this name. When we changed British road names, we thought those who have oppressed our people, played havoc with our country we should not have any memorials for them. It was absolutely right to rename the road, history says Aurangzeb was a bigot.

The ICHR, ICSSR, scholarly bodies are now headed by people linked to the Sangh.

If an individual is chosen to head an institution, just because he is a member of the RSS should not be a disqualification. You can’t be subjective about ideological leanings, either yours or mine. If a person is capable he or she should lead. What the Congress did was wrong, deliberately tried to keep a section of people out of the entire mainstream of the country. Everywhere people with a certain ideological bent were hounded out. Look at what happened to JS Rajput. He was a bureaucrat. But as soon as Arjun Singh became HRD minister on suspicion of being pro-RSS he was hounded out. We’re not doing that. We are going purely by merit, if qualified, people have every right to be there. Had we been doing what the Congress did, Rangarajan would not have lasted 16 months. We are simply going by the rule book and saying you can’t exclude anybody because he’s RSS.

Should the Culture minister have said Gita is the soul of India and not Koran or Bible?

Gita IS the soul of India. This has not just been said by Dr Sharma but for decades. The Gita provides the essential moorings of this nation. On Koran and Bible, I think he is being misrepresented. As for the Gita, Mahatma Gandhi said it is the soul of India, Tilak wrote `Gita Rahasya’, Annie Beasant has said it. There are so many great books, why not ask about Guru Granth sahib, why not Bhagwat Purana? They are also important. But why should we be uncomfortable about saying Gita is the soul of India?

Is the sangh in sync with the government on the economic agenda?

There can never be a guarantee of 100 per cent satisfaction. Broadly, we are happy that this government is dedicated to the welfare of the poor. But there may be differences on certain details of programmes. For example we collected inputs from the Kisan Sangh on the Land Bill. We passed their concerns onto the government to include in the reform agenda. There is a great difference between the Opposition and RSS-allied organisations. Congress just wants to block, but our sister organisations want to improve the legislations.

The RSS has broad views that policies should help the common man, should strengthen our economic sovereignty et al. These are broad views, the RSS does not get into details. Those details are gone into by our sister organisations like Kisan Sangh or those organisations looking at small scale industries, other sectors. They all give us inputs and they are very respectable, respected and important organisations and their views matter to us. The function of government is that if there is any disagreement to take it on board and move forward. We have to take their views on board. We don’t dismiss them. As far as the Opposition is concerned, on governance the final word is PM. He may lose the parliament session, but he will not budge

Aren’t initiatives like Ghar Wapsi sending out the signal of conforming to a Hindu majoritarian agenda?

Isn’t it a shame that rationalists have been murdered in the way they have?

Absolutely. Murder for any reason, any ideological reason is condemnable and we strongly condemn the murders of Kalburgi, Dabhokar and Pansare, or any rationalist or atheist. But don’t un-necessarily link it to a school of thought that has always condemned killing. The culprit should be punished. In fact the state unit of RSS, had issued a statement culprit should be punished. Nobody has the right to take life of anyone else for any reason.

Is the RSS anymore a cultural organisation or is it now a political outfit?

Culture is a vast arena, its not just about song and dance. Politics is also part of culture. There are many non- RSS people in the BJP, but just because someone is from the RSS doesn’t mean they can be denied their constitutional and fundamental rights.

Is the RSS trying to impose a Hindu majoritarian agenda on the country?

Totally wrong. No majoritarian or minoritarian agenda is being imposed. The RSS is concerned about the last man on the street. Yes, organisations have agendas, allow them that space, don’t pounce on them. If they have a view let it be discussed, supported or condemned, but don’t pounce on them as if they have no right to speak.