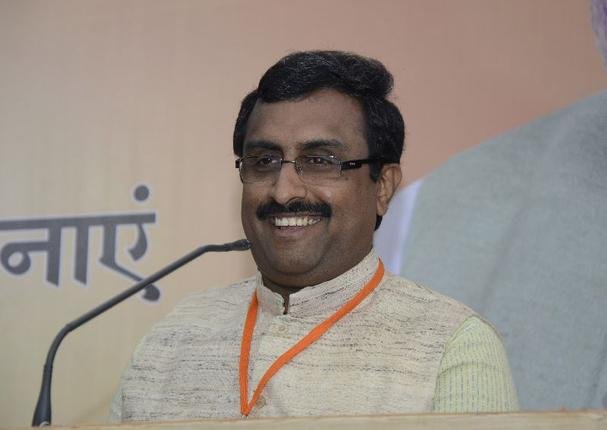 Former national spokesperson of the Rashtriya Swayamsevak Sangh (RSS), Ram Madhav, recently inducted into the Bharatiya Janata Party (BJP) as a general secretary, is considered to be a confidant of Prime Minister Narendra Modi and BJP president Amit Shah. Excerpts from a telephone interview with Bharti Mishra Nath, a former Public Policy Scholar at The Hindu Centre.

You were recently appointed as a general secretary of the BJP. How are you finding this change from a pracharak [full-time activist] to a politician?

I am still a pracharak. The political arena in which I am working now is certainly very different from the RSS. But before me, many RSS pracharaks have been assigned roles in different organisations connected with it, including the BJP. I am trying to learn the art and craft of politics.

With you being in the party, aren’t the communication channels between the government and the BJP smoother now?

We have a system in place for coordination between the party and the government. It is not dependent on any one individual.

It is said that you are the trusted person of both Prime Minister Narendra Modi, and BJP president Amit Shah. How have you managed this?

The premise itself is wrong. I am a functionary of the BJP. There are many more like me. We all work as one team. All of us are trusted by the Prime Minister and the party president and hence assigned different responsibilities.

It is another erroneous hypothesis. The community events organised in those cities were hosted by a large number of Indian community organisations active in those countries. The Prime Minister enjoys a huge reputation among the Indian community abroad cutting across party and sectional divides. I only helped the host groups a little bit because of my previous contacts with them. It shouldn’t be over-stated.

What is the BJP’s formula for peace in Jammu and Kashmir?

Peace, progress and prosperity in Jammu and Kashmir are possible only if the people offer a chance to a national mainstream party to rule the State. The BJP is the only party that fits that bill. The two family-centric parties, namely the National Conference and People’s Democratic Party, have ruined the State through corruption and misrule. We assure the people of Jammu and Kashmir that under a BJP government we will not only ensure absolute peace but also speedy development of the State.

Why have you not become a minister in the Modi government?

It should be kept in mind that RSS pracharaks who work in the party are not expected to occupy positions of power. They are assigned only party roles. I have been assigned to the party to work in its organisation, not in the government. Hence, this question to any pracharak is itself wrong.

Whenever there is a crisis, or when charges are levelled by the Opposition against Mr. Modi, the party, or the government, how do you defend them?

The charges are totally baseless and politically motivated. Prime Minister Modi has emerged as the most popular leader in the country today. Six months into government, his popularity is on the ascent. The opposition parties have no political agenda to challenge him, hence are resorting to gimmickry. Thus far, people have rejected their criticism by overwhelmingly supporting the BJP. Let us hope that the Opposition learns to be constructive rather than cacophonous.

Can you explain the increase in right-wing attacks since the BJP has come to power?

This is a myth. The country has been largely peaceful in the last six months. The economy is growing. Stock markets are soaring. Inflation has touched a five-year low. People are happy. The only State where communal incidents have happened is Uttar Pradesh. The blame for that should be squarely put on the shoulders of the State government under Akhilesh Yadav there. It was his political machinations that have led to communal tensions and violence in that State. Elsewhere in the country, there is complete peace and progress.

Many [Ministers/party persons] are making irresponsible statements. What are you doing to stop such embarrassments?

This is not true. There was only one instance of a new Minister using a subaltern slang for which she had subsequently apologised. But I would like to ask as to whether the Congress leader, Sonia Gandhi, ever apologised for calling [former Prime Minister Atal Bihari] Vajpayeeji a ‘liar’ or using epithets like ‘Maut ka Saudagar‘ [merchant of death], ‘Hitler’ for a Chief Minister in the past. There is another Chief Minister [an apparent reference to West Bengal’s Mamata Banerjee], who uses unprintable expletives with physical gestures against another party in her State; her party colleagues regularly abuse leaders of other parties. It is such parties and leaders who are criticising the most decently-behaved party leaders of the BJP. This is a complete mockery.

India is known for its scientific temper and acumen but there have been several instances of irrational arguments furthered by your government [Ministers/party persons].

This is a completely absurd question. Rationality or otherwise is a totally personal matter. If someone has a belief in a particular system he or she has a rationale for the same. [Jawaharlal] Nehru [Prime Minister, 1947 −1964] got Indira [Prime Minister, 1966-67 and 1980-84] and Feroze [Gandhi] married under a Vedic custom. After his [Nehru’s] demise, his ashes were strewn all over the Himalayas and immersed in the Ganges. Was he rational or irrational? These pontifications by those who begin their day by reading horoscope columns in newspapers are simply ridiculous.

Your critics inside and outside the party question your meteoric rise.

I am not aware of any such feelings among my colleagues. But I feel sorry if anybody is feeling that way. I am just one of the several general secretaries of the party. In our party, every functionary has an important role. Nobody is superior or inferior. Those who know the BJP and the Prime Minister would vouch for the fact that in our system nobody gets preferential treatment. All are equal. So, if anybody indeed feels so about me, it is unfortunate and far from truth.

(Bharti Mishra Nath is a journalist of over 17 years who has worked in leading Indian English dailies including The Times of India, The New Indian Express and Deccan Herald. As a Public Policy Scholar in The Hindu Centre for Politics and Public Policy from August to November 2014, Bharti studied the devolution of powers to the urban local government as envisaged in the 74th Constitutional Amendment.)