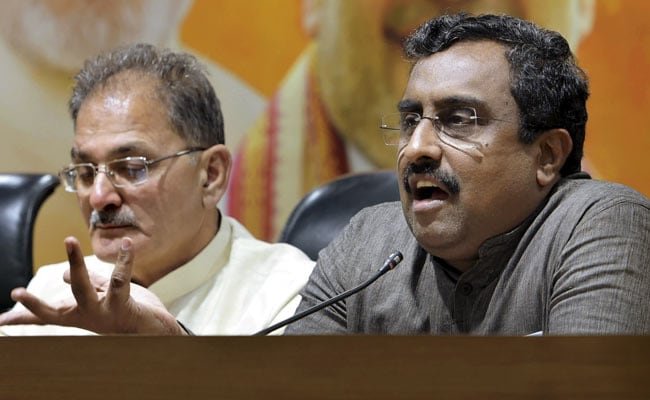 Speaking at the first Atal Bihari Vajpayee Memorial lecture organised by the Thinkers’ Forum, Mr Madhav cited the example of Ram Janmabhoomi issue to say that the judiciary has delayed the delivery of justice.

BJP general secretary Ram Madhav Sunday said that the judiciary was passing through a tumultuous phase and flayed “teflon-coated” liberals who he alleged pose a challenge to the country.

Speaking at the first Atal Bihari Vajpayee Memorial lecture organised by the Thinkers’ Forum, Mr Madhav cited the example of Ram Janmabhoomi issue to say that the judiciary has delayed the delivery of justice.

The case pertaining to the Ram Janmabhoomi before the top court was only to decide on the judgement of the Lucknow Bench of Allahabad High Court which had ordered the trifurcation of the controversial land, said Mr Madhav.

However, the Supreme Court ordered the translation of 14,000 pages into English as the documents were in Persian, Urdu and Hindi languages, said Mr Madhav.

However, when the court decided to hear the case from October 29, the chief justice said in three minutes that it was not a priority for the Supreme Court.

“When the Supreme court said it is not a priority then the protagonists felt that they have to prove that it is a priority. So you see a mass mobilisation happened across the country by the temple protagonists because such an important issue is dismissed as not a priority,” Mr Madhav said.

Speaking about ‘intellectuals’ and NGOs, Mr Madhav said these “teflon-coated” liberals even wanted to create South India as a separate country.

“This challenge comes from outside. It largely comes from the teflon-coated liberals. They are teflon-coated, so they are fashionable. They know how to use the systemic loopholes. They know how to subvert the system including the judiciary. They have friends in institutions. Friends this group includes some intellectuals and NGOs,” said the BJP leader. The BJP leader also flayed the Congress for alleging corruption in the Rafale deal and calling Prime Minister Narendra Modi’s names. “Those who themselves were thieves want to portray everybody as thief,” he said.