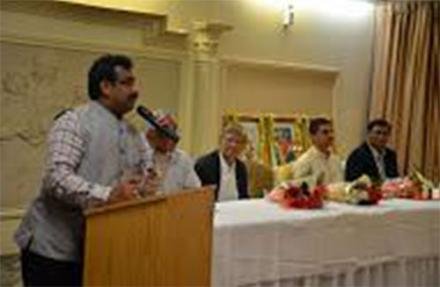 Speaking extempore in the packed hall, Shri Ram Madhav said that as a BJP leader, he was giving the public speech for the first time and that too in a foreign land but among the Indian community. He said that India is re-surging under the dynamic leadership of India’s Prime Minister, Shri Narendra Modi and his government consists of young ministers who are working hard and brought a qualitative change in the work culture. The Bureaucracy is responding and the files are being dusted off and cleared fast. He said that the recently concluded parliamentary elections were historic because not only the mandate was huge for Modi but also Congress Party was decimated to such a level that it could not fulfill the constitutional rules to attain opposition party status. He said that Congress got zero in 12 states and 5 union territories while BJP has representation from every state except Kerala. “Thus, BJP became a pan Indian national party”, he said to the thunderous applause.

In his eloquent speech, Shri Ram Madhav said that Modi is one of the most popular leaders in the world and several countries are lining up to invite him. Giving examples of his leadership skills and vision, he said that the leaders of SAARC nations were invited to his swearing-in ceremony and visited Bhutan and Nepal sending a message of according high priority to the bordering countries. “The reception he received from public in Bhutan and Nepal speaks of his popularity beyond India’s borders,” he said. The goal of Modi’s government is to serve the last man in the queue as propounded by the party’s ideologue, philosopher and founder leader Shri Deen Dayal Upadhyay. He gave example of how India withstood the pressure of the world nations at WTO and safe guarded the interest of its farmers. He said that a man who gave five meetings a day during the elections has not uttered a word for the last 75 days and letting his work speak for himself and his government like a true karma yogi. Shri Ram Madhav said that Modi government accord high priority to Hygiene and cleanliness and set social service goals for the party. Commending the work done by Madhya Pradesh, government in this area Shri Ram Madhav exhorted the Indian Diaspora to help India achieve its goals.

OFBJP President Shri Chandrakant Patel, in his welcome speech exhorted the Indian Diaspora to give their might to the development of India. He promised that OFBJP would open a “Service Center” in New Jersey to attend the requirements of Indian American community.

Earlier, the meeting started with ceremonial lighting of the lamp and offering flowers to the founding fathers of BJP followed by the rendition of Vandemataram led by Shri Sumedh and Shri Pushpahas. Shri Abhimanyu Gupta (Joint Secretary, HSS) gave a presentation on HSS work in New Jersey while Shri Chandrakant Patel highlighted the work done by OFBJP during the election campaign followed by a presentation of Shri Lalji Goswami (Youth Convener, OFBJP). Shri ILA Sukhadia spoke about Vishwa Hindu Parishad of America (VHP-A) and Prakash Waghmare gave a glimpse of Ekal Vidyalaya’s work.

Shri Aravind Modini, OFBJP Youth Co-Convener has moderated the Question and Answer session. Answering a question on the law and order situation in West Bengal and Uttar Pradesh, Shri Ram Madhav said that the government is closely watching the situation as the respective state governments are filing false cases on BJP office bearers to contain the party. However, he reiterated that BJP would storm to power in those states in the near future. To another question, he said that the media could no longer afford to ignore BJP. Answering a question related consulate services in US, he said that services will improve and OFBJP has a great opportunity to work with the consulates in improving the services. On the issue of appeasement of minorities by the Telangana government that promised to bring the rule of Nizam, he reminded that another Sardar Patel is now ruling India and India’s integrity will be preserved at all costs.

Shri Krishna Reddy (Treasurer, OFBJP) presented the vote of thanks and recognized the community leaders including Shri Sunil Nayak who provided the venue, and Arvind Patel who provided the food. A sumptuous dinner was served to the satisfaction of the attendees.