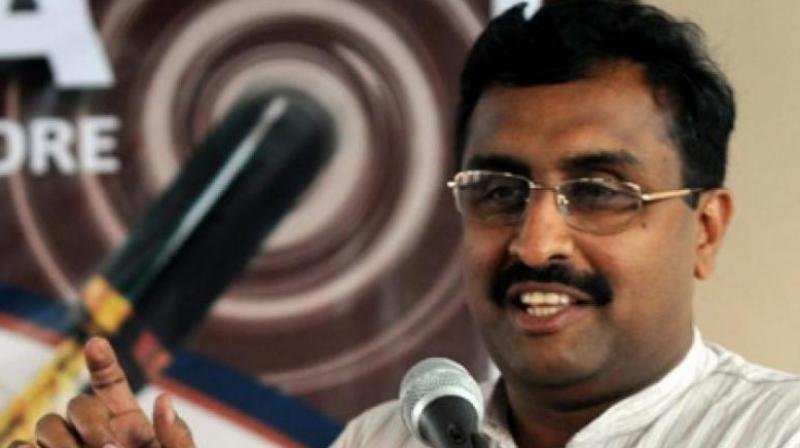 The leader said that Modi gives great importance to Jammu is borne by the fact that he would be beginning his campaign from the region on March 28.

Srinagar: BJP leader Ram Madhav said on Wednesday that his party would perform better in the Lok Sabha elections in Jammu and Kashmir this time than it did in 2014. He also said that the BJP has urged the Election Commission of India (ECI) to hold the state Assembly elections at the earliest.

Mr Madhav, while addressing press conferences in Srinagar and Jammu, said that he was quite confident about the BJP’s retaining both Jammu and Udhampur seats of Jam-mu region and also that of Ladakh. He exuded confidence that the party would perform well in the three constituencies of the Kashmir Valley as well.

“We’re hopeful of retaining the two Jammu seats and also that of Ladakh and getting a result better than what the BJP got in the 2014 Lok Sabha elections in J&K. As for the Valley, we are trying to augment our strength and perform in a better way there as well,” he said.

He was hopeful also of the NDA being voted to power again in the upcoming elections by the people on the basis of the report card of the Prime Minister, Narendra Modi. “The elections will be held between April 11 and May 19 and results declared on May 23 but everyone in the country knows what would be the outcome of these polls. There is agreement even in the Opposition on the BJP’s winning these elections hands down,” he claimed.

The leader said that Mr Modi gives great importance to Jammu is borne by the fact that he would be beginning his campaign from the region on March 28.

The BJP national general secretary who earlier held a series of meetings with senior party leaders in the twin capitals during which election preparations were reviewed hit out at the Congress over its entering into an alliance with the National Conference (NC) for a “friendly contest”.

“This drama that is going on that they are in alliance in Jammu, but fighting in Kashmir. They are trying various types of exercises against Modiji and the BJP, let them do it. We will win two seats in Jammu and one in Ladakh and will try our best in Kashmir so that our candidates go forward,” he said.

He said that the NC and also the People’s Democratic Party (PDP) had boycotted the recently held panchayat and urban bodies’ elections on the pretext that Article 35A and Article 370 were facing a threat but decided to join the fray in the Lok Sabha polls “because we have to go to the Parliament.” He termed it as an attempt by these parties to serve their own vested interests.

Accusing both the NC and the PDP of shielding and sympathising with separatists and militants, Mr Madhav said that the BJP wants that all the three Lok Sabha seats in the Kashmir Valley “should go to those who stand for unity of the country”.

He said, “The politicians who indulge in doublespeak should be kept away. People have seen what statements are being given by these politicians. The whole country knows which party has what agenda. The people of Kashmir know as well and they will understand it.”

He said that though the condition of the Congress party in Jammu was already ‘dardnakh (miserable)’, the ‘patriotic people’ of the region will not tolerate its closeness with the forces inimical to the interests of the country and teach it a lesson in the elections. He

said, “This party has entered into an alliance with NC one of whose leaders and candidates for Baramulla seat Akbar Lone has publicly chanted Pakistan zindabad slogan. We demand that an FIR should be lodged against him forthwith.”

He said, “I would say this alliance is not different from separatists and militants because the alliance leaders cry over militants’ deaths and wail at their houses and work in tandem with anti-national forces. I will rather compare this alliance with Hizb, Jaish and Lashkar.”