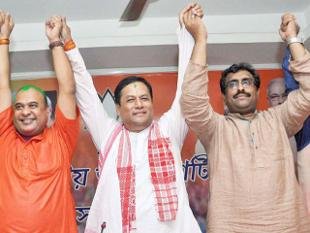 The BJP leaders were hopeful about pulling off their maiden victory in Assam , but the extent of it has left even the most optimistic of them pleasantly surprised.

After it was clear that BJP had made an entry into the border state with a thumping majority, party general secretary and Assam incharge Ram Madhav spoke to ET over the phone from Guwahati about what he describes as a “grand victory.”

Strategic alliances It was a “dream alliance” we put together. It’s a dream alliance because it is like a dream for people of Assam to have them (parties) all under one umbrella. We forged a rainbow alliance of smaller parties and ethnic groups that included the Asom Gana Parishad (AGP), the Bodo People’s Front (BPF), and the Rabha and the Tiwa communities. People of Assam reposed their faith and trust in the alliance.

Through the alliances, the BJP sought to protect the interests of greater Assamese society, which include Assamese, Bihari Marwaris, Bengalis, Hindus, Muslims, Christians, Sikhs and all smaller tribes and communities.

Polarisation What worked for the party was the focus on regional issues, development and the stress on preserving the identity of Assam. Whoever says there was polarization is ignorant of electoral reality of the state. There are 32 Muslim dominated constituencies and BJP had won in 13 of them. This shows that we secured Muslim votes too.

Insecure minorities The government would work for development of all. Our entire focus all through the campaigning was on development as we highlighted Congress misrule and rampant corruption. Even (Narendra) Modi ji focused on development during the campaign. The state accounts for 34 per cent Muslim voters. We wouldn’t have won if there was a sense of insecurity among the minority community.

Immigration from Bangladesh The borders between any two countries need to be secured and sealed, and the demarcation to be respected by both the sides. Even the border between Yemen and Saudi Arabia is sealed. The border with Bangladesh will definitely be secured.