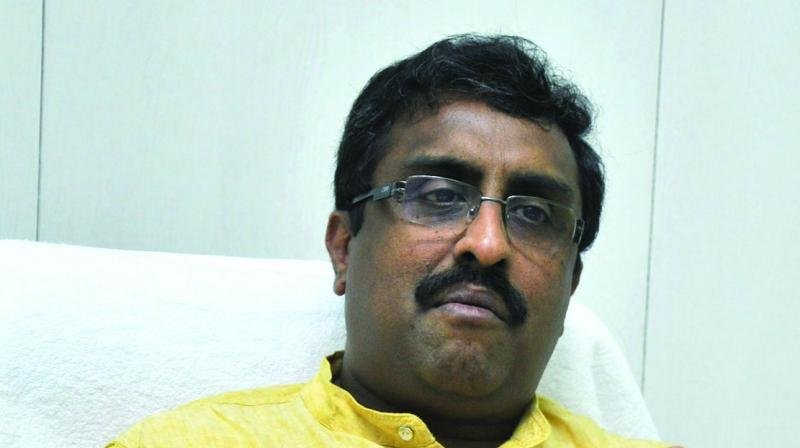 He explains the real meaning of his party’s ‘Congress-mukt Bharat’ slogan.

Ram Madhav, who played a crucial role in BJP’s first government in the north-eastern state of Assam and is a key link between the Centre and the PDP-BJP government in Jammu and Kashmir, tells Yojna Gusai that the people are rejecting the Congress. He also explains the real meaning of his party’s ‘Congress-mukt Bharat’ slogan.

Your party registered a historic win in Assam. What were the reasons?
There were two-three important reasons. Assam is one of the very backward states in terms of human resources indicators. We promised them development. Fifteen years of Congress misrule has left the state in very poor condition in terms of development. We also promised to address the threat to their identity, culture and honour, mainly from infiltrators from across the border. What added to our performance was the work and dedication of our state leaders. The entire election was carried on their shoulders and it was their joint effort that gave us this verdict. Another factor was the Congress’ refusal to be accountable to the people and diverting attention from its local failures to the issues in Delhi and other places. There were more posters of JNUSU president Kanhaiya Kumar put by the Congress than of its vice-president Rahul Gandhi.

What about your alliance in the state?
I call it a “dream alliance”. This kind of rainbow alliance has never been seen in the state. For the first time, different sections of Assamese society came together under BJP’s leadership. Our alliance was also a major factor.

You say development was your main poll plank but you were criticised for polarising the atmosphere in the state.
You see, if there was any polarisation, it was only on the issue of who will secure the Assamese identity, its culture and tradition. If there was polarisation, it was between those who wanted to protect the identity of Assam and those who were openly, brazenly siding with the infiltrators. It was not religious polarisation. There are a large number of Assamese Muslims who want their state’s identity, language and culture to be protected.

But what about Kerala, where, despite your alliance with the Sree Narayana Dharma Paripalana Yogam and strong anti-incumbency against the UDF, people voted the Left-led alliance to power?
We are happy that for the first time the BJP has gained entry to the Kerala Assembly. In terms of vote share, we secured 15 per cent popular vote, the highest ever in all these years. It is a matter of great satisfaction for all of us. At another level, we are sorry that we could not get more seats. Probably, we will have to strategise our campaign well for the next elections, because in elections what really counts is the number of seats. We will probably have to think and plan more strategically for the next time.

Now that you have gained a foothold in Assam, what are your plans for other north-eastern states?
Assam is seen as a gateway to the entire north-eastern region and this victory should give us good scope to increase our footprint in the region. We have a coalition government in Nagaland and we are trying to increase our electoral base in Manipur, and we hope to form a government there. We formed the North East Democratic Alliance (NEDA), which is an alliance of non-Congress parties. On one hand, NEDA’s objective is to free the region of the Congress and, on the other, to increase BJP’s footprint wherever possible.

But the BJP is being accused of using all sorts of means to carry forward its “Congress-mukt Bharat” slogan.
The people of the country today are rejecting the Congress outright. Look what happened in this recent round of elections — the Congress lost power in Assam and Kerala. In states like Tamil Nadu and West Bengal, the victims were those who tried to join hands with the Congress. People not only punished the Congress but also punished their bedfellow. So this means people are rejecting the Congress. When we say “Congress-mukt Bharat”, it means our effort in cleansing the kind of politics that has come to be identified with the Congress, the politics of corruption and politics of nepotism. This kind of politics has no place and the people are also rejecting it.

But the BJP had to face flak not only from the Congress but from other political parties for creating political crises in non-NDA ruled states like Uttarakhand.
It is the Congress which is destabilising its own government, and not the BJP. In Uttarakhand, its own MLAs defeated the state government’s finance bill. The Congress can’t keep its own house in order and it blames us.

But the Uttarakhand high court orders were against the Centre and the Supreme Court also ordered the floor test, which the Congress won.
It’s okay that there was a particular situation in Uttarakhand in which courts have given a kind of a verdict. But that doesn’t undermine the fact that the Congress had lost its majority in the House and also the constitutional right to continue in power. But it still tried to cling on to power there.

After the Assam elections, the buzz is that Rajat Sethi is the BJP’s new election strategist after Prashant Kishor decided to join your rival’s camp.
Look, in elections we take support from professionals who also help us in certain ways, like matters related to data, campaign, etc. They are what people call “backroom boys” and they should be left as backroom boys and not brought to the front row.

The BJP’s performance in Tamil Nadu was very dismal. Does the BJP need to put in more effort in the south?
Tamil Nadu was definitely a disappointment this time whereas in Kerala and West Bengal the BJP has made such an important gain. Probably, we need to work harder in Tamil Nadu and other southern states.

You managed only one Assembly seat in Kerala, where your party has been raising the issue of RSS and BJP workers being attacked by the Left cadres for many years now.
Kerala has a history of Marxist violence against all their detractors. The RSS and BJP have been victims of Marxist murder politics for the last several decades. We have lost scores of important karyakartas; many were killed, maimed; it’s kind of an ongoing murder campaign. And ever since the Marxists won the elections, their party people have resumed their murder campaign.

Next in line are Assembly elections in UP, which is represented by the PM himself. Do you think your party is any match for the regional players — the SP and the BSP?
That is the target. Our effort is to surpass the regional parties and stand before the people of Uttar Pradesh as the credible alternative for the state. I hope that in the coming few months the BJP will rise in stature in the eyes of the people and, by the time elections are near, we are able to form the next government in the state.

But other parties have already started blaming your party for communalising Uttar Pradesh.

Those who run a blatant caste-based campaign accuse the BJP of this and that doesn’t behove well for them. The BJP follows politics of development, progress, peace and harmony. They (Opposition) have no issues or anything against us, so they come out with this allegation.

What about a chief ministerial candidate in Uttar Pradesh?
If we take a decision in this regard, we all know it will not be a secret.

What about the GST bill? Many Opposition parties, other than the Congress, have said that they will support it. Do you think it will finally be passed in the Monsoon Session of Parliament?
The Congress’s opposition to the GST is not based on any principle, it’s pure and simple politics. In fact, many Congress chief ministers, though there are not many left, but when they were there, they were also supporters of the GST. But Congress’ present leadership is only stalling it for political expediency. I hope they will rethink their opposition to the bill because it is in the national interest.

You played a very crucial role in the BJP running the coalition government with senior partner PDP in J&K. But lately lots of controversies, including on the Sainik colony, have come to the fore.
The controversy about Sainik colonies is uncalled for, for the simple reason that this decision was taken by the previous government. It was Omar Abdullah’s government that took this decision to allocate land for a Sainik colony. To raise it now and turn it into a controversy is highly uncalled for. There can be a debate on how to build those colonies, but one should be clear that the decision was taken by Mr Abdullah when he was chief minister.