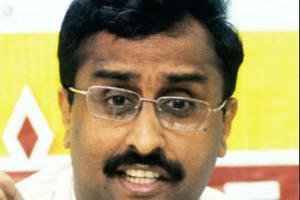 15 Jul, 2013, 0514 hrs IST, Amita Shah, ET Bureau
Contrary to perception in sections of the media and the public, the RSS doesn’t permit its office-bearers to get directly involved in electioneering.

In an interview with ET, Ram Madhav, leader of RSS, talks about the organizational structure of BJP and RSS, and maintains that the two are independent of each other. Excerpts:How do you respond to the allegations that the Rashtriya Swayamsevak Sangh micromanages the affairs of BJP?

There is no truth in these allegations of micromanagement. We don’t even macro-manage the affairs of the BJP for the simple, yet most important, reason that the swayamsevaks of the RSS working in the BJP are capable of handling their affairs and we have full faith in them. The Sangh and the BJP share an ideological relationship. We also share human resources occasionally. But organisationally, both entities are independent of each other. None interferes in the day-to-day affairs of the other.

A controversy was sought to be created where it didn’t exist.

Does the Sangh feel that Modi’s projection as the prime ministerial candidate will bring electoral dividends to the BJP?

The BJP leadership is the best judge of what brings electoral dividends to them. We believe that they take an appropriate decision after due consultation within. We also believe that whatever they decide must be in their interest. We don’t interfere in or influence their decision-making …That he is popular is a ‘secret’ well known.

Are Modi’s critics right when they say that his candidature will polarise the electorate?

The BJP leadership knows better about these matters.

In politics, parties indulge in such allegations and counter-allegations . Some of them will be out of frustration and hence ridiculous. The Sangh doesn’t like to get involved in this political sparring.

Senior BJP leader LK Advani is reportedly unhappy with the Sangh’s pointsman in the BJP. Is that true?

Shri Lal Krishna Advani ji is a senior and respected leader. His views are always taken seriously . We have no knowledge of the authenticity of the reports being referred to about Advaniji’s unhappiness with any RSS functionary.

What was the message for the BJP from the Sangh’s recent meeting in Amravati?

Amravati meetings are an annual review exercise that happens after the training programmes are completed. We review the participation in our training programme and plan for the activity and campaigns in the coming months. The message is only for the Sangh functionaries.

What will be the Sangh’s role as the BJP gears up for elections — to the state assembles as well as the Lok Sabha?

The RSS doesn’t play any role in elections. Contrary to perception in sections of the media and the public, the RSS doesn’t permit its office-bearers to get directly involved in electioneering at any level. However, we certainly ask our swayamsevaks to actively participate in the election process as enlightened citizens. We expect them to encourage other citizens to utilise their democratic right of vote and ensure that maximum voting takes place in their respective areas.

What will be the role of the Sangh’s various offshoots in the elections?

They will encourage their ordinary members to actively play the role of enlightened citizens who have the good of the country at heart. Like the BJP, these outfits are otherwise independent organisations and, hence, the Sangh doesn’t give any directive to them about the elections.