(The article was originally published by Indian Express on January 14, 2023 as a part of Dr Madhav’s bi-weekly column titled ‘Ram Rajya’. Views expressed are personal.)

Most leaders reacted to RSS chief Mohan Bhagwat’s interview without reading it. It was not only a comprehensive interview, but also a very forward-looking one. Partial reporting gave ammunition to those who wanted to perpetuate a negative perception about the RSS.

Eminent American author Walter Andersen had once quipped that “the RSS is difficult to understand and easy to misunderstand”. This misunderstanding stems mostly from deliberate misrepresentation of facts, but also sometimes because of the lack of articulation from the RSS. In the present case, since the interview was long and in Hindi, most commentators didn’t bother to read it fully. On its part, the Panchjanya should have released an English transcript simultaneously for the benefit of those who wanted to understand the views of the head of the most influential organisation today.

The RSS is not a fossilised body. It has constantly evolved with changing times. After independence, Guruji Golwalkar, the then chief, introduced several dimensions to the functioning of what is today described as the “Sangh Parivar”. Balasaheb Deoras, Rajendra Singh and K S Sudarshan, later chiefs, too, introduced transformative changes in the functioning of the organisation.

Bhagwat is taking that transformation to the next level with greater openness. From a media shy and introverted organisation, the RSS has today emerged as the most visible force ready to engage with the world on all the contemporary issues and challenges.

In his interview, Bhagwat talks candidly, even about issues like LGBTQ. In the early 2000s, as spokesperson of the organisation, I had once said that the British era penal provisions for sexual acts that were “against the order of nature” must be revisited. Over the next few years, the RSS had firmed up its view on the issue and the Sarkaryavah (general secretary) of the organisation, Dattatreya Hosabale, stated in a media interaction in 2016 that “I don’t think homosexuality should be considered a criminal offence”. Two years later, in 2018, the Supreme Court struck down Section 377 of the IPC, thus decriminalising homosexuality.

In his Panchjanya interview, Bhagwat took this debate further. He described homosexuality as “biological” and said that “transsexuals are not a problem”. He stated that they have been a part and parcel of the customs and traditions of Hindu society. Citing instances from Mahabharat, he said that LGBTQ groups existed “ever since humans existed”. He urged that the LGBTQ people should get “their own private space as per their wishes, and also a sense of belongingness with the rest of the society”. However, he cautioned against too much of a hullabaloo over it.

On the population question too, Bhagwat took the most rational stand advocating for creating awareness in society rather than resorting to laws and acts. It is well-known that demography has been a major bone of contention for Hindu groups in the country. Growing imbalance of the religious demography of the country has triggered the fear that the Hindus could become a minority in the future.

India was partitioned in 1947 on the basis of its religious demography. That has left a perpetual fear in the Hindu mind about population imbalance. Global developments like carving out of East Timor from Indonesia or conflicts in Sudan and Serbia have further fortified this fear.

In India, there were reasons for this concern. The Total Fertility Rate (TFR), the number of children a mother gives birth to, has been imbalanced among major religions in India. The official data suggests that while TFR among Hindu women is about 1.94, and 1.88 and 1.61 among Christians and Sikhs respectively, it stands at 2.3 for Muslims. That means the Muslim population is growing faster than the population of other religious groups. But a data point also shows that the TFR among Muslim women fell by 46 per cent in the last three decades.

Bhagwat took a very logical view of this imbalance. He emphasised that not force but awareness should be the way forward to address this imbalance. “We don’t want to oppose anybody. It is not about fertility rate. More imbalance is created by religious conversions and infiltration. We noticed that the imbalance can be addressed by arresting them”, Bhagwat said in the interview.

One issue that dominated media reporting on Bhagwat’s interview was about his talk of a “1000-year war”. The UNESCO Constitution begins with the statement that “wars begin in the minds of men”. Bhagwat’s emphasis was actually on removing that mindset of war. It is a historical fact that India has been subjected to various political and religious aggressions over millennia. That history has left an imprint, leading to occasional aggressive outbursts in sections of the society.

Bhagwat was categorical that such aggression was uncalled for. “It is not beneficial to be in aggression mode all the time”, he said. He even cited the example of Garibaldi to drive home that “it is wrong to assume that those who can fight can do everything”.

Bhagwat’s statement that Muslims should give up the mindset of superiority was made into a controversy by taking it out of context. He said that the attitude among some that “we can’t live with others” must be given up. He added that this mindset should be given up by everybody. “If there is a Hindu who thinks like that, he should discard it. A communist should also shed it”, Bhagwat said.

In fact, it was the same thing that Gandhi and Nehru told Indian Muslims several times. Nehru went to Aligarh Muslim University in 1948 to ask the students whether they too feel “proud of our inheritance and our ancestors… that belongs to you as much as to me? Or do you feel alien to it and pass it by without understanding it or feeling that strange thrill?”

Bhagwat asked the same questions differently. Jesus asks Pontius Pilate to define the words before entering into an argument. Words mean differently to different people based on their prejudices and notions. Bhagwat’s Bharat needs to be understood by removing the prism of such prejudices. 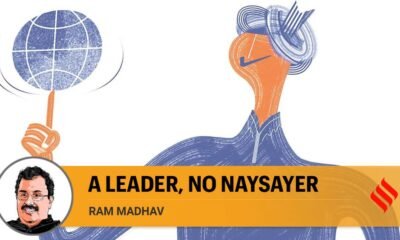 2023: The year India may realise its global power aspirations