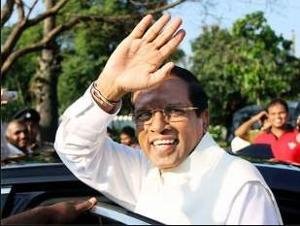 NEW DELHI: The newly elected president of Sri Lanka Maithripala Sirisena will be visiting India on February 16. This visit is significant for both the countries. Sirisena has indicated on the day of ascension to office that his maiden foreign visit would be to India. Days after winning the historic Presidential elections, he dispatched his new foreign minister Mangala Samaraweera to New Delhi with a clear message that the new Sri Lankan dispensation looks up to India with hope for strengthening bilateral relations.

As close neighbours India and Sri Lanka have enjoyed good relations for decades. Sri Lanka was one of the active participants in Nehru’s Non Aligned Movement – NAM diplomacy. Things turned sour in ’80s when the ethnic strife started vitiating the atmosphere in the island nation. India had to struggle hard to maintain a balance between its domestic political compulsions and international obligations. In the process it has created enemies and friends on both sides.

2008-09 was a turning point in Sri Lankan history. After months of bloody battles across the Northern Province, the Sri Lankan Army had finally decimated the LTTE, thus bringing to an end 25 years of armed ethnic conflict. Former President Mahinda Rajapaksa overnight transformed into a national hero and a cult figure. Rajapaksa decided to use this favourable political climate to advance the Presidential elections. Although his first term as President was to end in November 2010 he went ahead and held the elections in January 2010. Fresh from the success in the war against LTTE, Rajapaksa earned a convincing victory over his rival Gen. Sarath Fonseka by a margin of over 20 lakh votes. Interestingly he also secured a favourable judgment from the country’s Supreme Court to begin his Presidential tenure as per schedule in November 2010.

Rajapaksa’s second term as president was to end in November 2016. He started off the second term with high popularity ratings. However in four years his popularity started dipping. Country’s economy too started slipping into a morass. Allegations of corruption, nepotism, centralisation of powers and disaffection in various ethnic and religious communities have surrounded his regime. Realising that waiting till 2016 would further dampen his prospects of re-election he chose to advance the Presidential elections to January 2015. Had he won the elections he would have started his third term in November 2016 and continued as the President till November 2022.

But the run up to the elections in January 2015 saw many dramatic developments in the country’s politics. One of his closest aides in the ruling Sri Lanka Freedom Party – SLFP and a Minister in his Cabinet Maithripala Sirisena had suddenly decided to come out and join hands with the Opposition. This was a major blow to the already struggling Rajapaksa’s regime. Until then the Opposition was in a lacklustre condition. Sirisena’s entry had helped in galvanising the Opposition. Although Rajapaksa’s regime gave the Opposition only 30 days to become battle-fit, things moved so swiftly against Rajapaksa that in the end he lost the elections, in a nail biting finish, by around 5 lakh votes.
The new government headed by President Maithripala Sirisena and Prime Minister Ranil Wikremesinghe has daunting tasks ahead. It is going to face political and economic challenges soon. Rajapaksa’s regime has left the country in a major economic mess. International debt has piled up hugely. Debt servicing is expected to begin later this year. According to one estimate almost ¾th of the national revenue will be consumed in debt servicing. The new government has to take urgent steps to bring back the economy on track. Therein lies the political challenge to the new government.

While the huge international debt has put a lot of burden on the government it has also helped bringing in good infrastructure and development into the country. It is the developmental work, which is visible to the naked eye of any visitor, which has earned goodwill among the people, especially the youth, for Rajapaksa. Together with the macho image he earned after winning the ethnic conflict, development oriented activities made Rajapaksa a formidable force in the country.

The new government has promised to usher in major constitutional changes in the first 100 days and then go for fresh elections to the Parliament. Winning a majority in the Parliament elections is the crucial political challenge that the new leadership faces. During the Presidential elections disparate groups like ethnic Tamils in the north, upcountry Tamils in tea garden areas, Muslims and two major Buddhist parties have supported Sirisena resulting in his narrow electoral success. Keeping this rainbow alliance intact is a huge task for the present coalition leadership.

From the Indian perspective this new regime in Sri Lanka should help strengthen the bilateral relations. Under Rajapaksa, although the relations remained cordial, occasional tensions and suspicion remained the order of the day. Government of India faced tremendous political pressure from Tamilnadu over fishermen issues and from the diaspora over the problems of ethic Tamils in Sri Lanka. As a responsible neighbour, India had to tread very cautiously respecting the sovereignty of the neighbour while attending to concerns surrounding human rights.

However Sri Lanka’s growing proximity with China caused serious concerns in sections of the Indian security establishment. What precipitated matters was the sudden appearance of two nuclear submarines at the Colombo Port late last year. Indian establishment’s serious concerns were conveyed to Rajapaksa’s administration which seemed to have taken note of the same.

At a time when the new President is visiting India these two issues, namely economy and security, will certainly dominate India’s agenda. Sri Lanka’s trade with India forms almost 45% of its total trade. The country certainly looks up to India for stabilising and strengthening its economy. China too has major stakes in Sri Lankan economy; especially in the infrastructure sector. Sri Lanka’s economic stability requires a fine balance of support from both the major powers.

On the security front India and Sri Lanka can have greater cooperation in India’s ambitious objective of maintaining peace in the Indian Ocean region.

In spite of the fact that it is an internal matter of Sri Lanka, the ethnic reconciliation remains an area of concern for many countries in the world including India. The new government is going to face the real acid test in handling this issue. The Tamil National Alliance (TNA) has supported Sirisena in the Presidential elections in a big way after eliciting some promises like reduction of the presence of Army, release of the lands controlled by the Army in the Northern Province etc. The TNA has not joined the government yet and is waiting for the promises to be fulfilled. The new government has also to handle the sensitive issue of Buddhist – Muslim strife. Although not of great proportions this issue too has caused enough ripples in the country already plagued by other forms of strife.

Prime Minister Narendra Modi is expected to visit the island nation in March to further cement the relations between the two countries. Trade and tourism remain two major areas of engagement between the two countries. Indian investments in Sri Lanka will be heartily welcomed because of the natural civilisational proximity. Sri Lankan business community is eagerly waiting for the arrival of the Indian Prime Minister who, they hope, would bring in more trade and investment into their country.

Cultural and civilisational linkages play an important part of tourism engagement. India’s Buddhist circuit of Sanchi in Madhya Pradesh, Sarnath in Uttar Pradesh and Bodh Gaya in Bihar attracts large number of tourists from Sri Lanka every year. Although the Indian tourist inflow is proportionally less, it is steadily on the rise in the last few years after the war. Sri Lanka has many beautiful tourist atractions. Its historic association with the epic Ramayana is an added atraction for Indian tourists.

It can be hoped that the governments of both the countries will focus on all these areas and do everything possible to take bilateral relations to newer heights.

(The writer is general secretary, BJP)