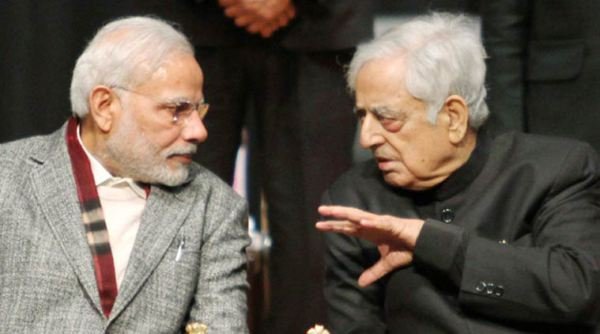 When the Jammu and Kashmir BJP gave the call for “Mission 44+” during the run up to the assembly elections in the state, we had our own assessments and calculations for how we could achieve it. We foresaw various post-poll scenarios and worked on different permutations and combinations. But frankly, not even once did we think of a situation where we would be joining hands with the PDP.

Something that was unthinkable and unimaginable has happened. Today, J&K has a coalition government led jointly by the PDP and the BJP. In politics, the lure of power sometimes makes strange bedfellows. Occasionally, politics also provides you with an opportunity to think of impossible things to achieve larger goals. What prompted the BJP and the PDP to form this alliance?

Had it been only the lure of power, there would have been a government in Jammu some six to eight weeks ago. If power were the only objective, better options were available to the PDP — the Congress and the National Conference were ready to support it unconditionally. An “unholy” alliance between these parties would have left the BJP the lone opposition in the state. But besides being unholy, it would have also become an unrepresentative government.

The J&K assembly elections have thrown up a difficult and complex verdict. Any government without BJP participation would have meant the exclusion of one full region of the state in the administration. Thus the options were restricted. And we decided to go for the most difficult, yet most durable, option —  a PDP-BJP alliance.

“The results of these elections have been judged as fractured and indecisive by everyone. The reality is that it is not the mandate of political parties that is fractured; it is the polity of J&K that is fractured. Instead of being judgemental about these electoral results, the PDP and the BJP have made efforts to understand the verdict in all its complexity” – this is how the common minimum programme of the PDP-BJP coalition describes the electoral outcome.

It took a full two months to stitch this alliance carefully. As Chief Minister Mufti Mohammad Sayeed described it aptly, the two parties are like the “North and South Poles”. There were difficulties, highs and lows, as well as stalemates during the nerve-wracking negotiations.
There were at least a couple of occasions when we almost decided to call off the talks and pack up. It was like the proverbial war of nerves.

Yet we succeeded in the end because of two factors. First, neither side looked at government formation as arithmetic. We had a much larger objective in mind. We had a distinct mandate that needed to be respected. There was an opportunity to bring the people of Jammu and the Valley closer. As Mufti pointed out, the geographical distance can be covered in six hours; but

the emotional distance couldn’t be covered in 60 years. We are also presented with the opportunity to decimate the emotional barriers between J&K and the rest of the country.

Second, our success depended on the fact that we didn’t allow any extraneous factors to influence us. We kept the negotiations strictly under wraps, not with any ulterior intention, but to ensure that we don’t get distracted.

We finally have a common minimum programme, “Agenda of the Alliance”, released yesterday by the new chief minister and his deputy. Have we compromised? A resounding no. Where we have fundamental differences, we have admitted it honestly and given our prescription based on a common understanding —  not necessarily consensus —  of each other’s concerns.

Take, for example, the question of Article 370. “While recognising the different positions and appreciating the perceptions BJP and PDP have on the constitutional status of J&K, considering the political and legislative realities, the present position will be maintained on all the constitutional provisions pertaining to J&K, including the special status in the Constitution of India” — this is what the common minimum programme says. We have agreed to “maintain all constitutional provisions” for the next six years, something we did in 1999, when the Atal Bihari Vajpayee-led NDA government was formed.

Similarly, on the contentious Armed Forces (Special Powers) Act, the common minimum programme has left the onus of taking a “final view” on the Union government, while the state government would, for its part, “examine” the need for “denotifying disturbed areas”. Even here, both the parties admit that they “have historically held a different view on the AFSPA and the need for it in the state at present”.

The focus of the new coalition government will be threefold: restoring peace, the large-scale rehabilitation of flood victims and ensuring “equitable distribution and balanced development” of all the three regions of the state. Towards that end, the common minimum programme has many social, humanitarian and developmental initiatives for all sections of the state.

The Kashmiri Pandits will return to the Valley with “dignity based on their rights as state subjects”. A “one-time settlement” will be worked out for the refugees from Pakistan-occupied Kashmir of 1947, ’65 and ’71. Measures will be taken to ensure that the West Pakistan refugees who have been languishing in the state for almost 70 years, without their basic human needs being taken care of, will get “sustenance and livelihood”. A new dawn is breaking for millions of hapless refugees who will now get a ration card for the first time in their lives.

An ambitious agenda of governance and development guides the new coalition in the state. The challenges are serious. A rotten, corrupt system is what the new leaders have inherited. A near bankrupt economy and the utter misery of the people stare them in the face. Above all, they will have to manage the inherent contradictions between two political parties with distinct ideological predilections.

But the leadership is mature. It may take some time to adjust to the new partnership.

A faux pas causing PR problems every now and then can’t be ruled out. However, if the coalition leadership is committed to the vision enunciated in the common minimum programme, it would open a new chapter in the history of J&K.

A political commentator has observed that this common minimum programme is a document that symbolises the second and de facto accession of the state. This may sound hyperbolic. Nevertheless, it underscores the significance of this historic alliance in J&K. Its success will herald a landmark strengthening of India’s integrity and sovereignty.

(The writer, national general secretary of the BJP, led the negotiations with the PDP for government formation in J&K)