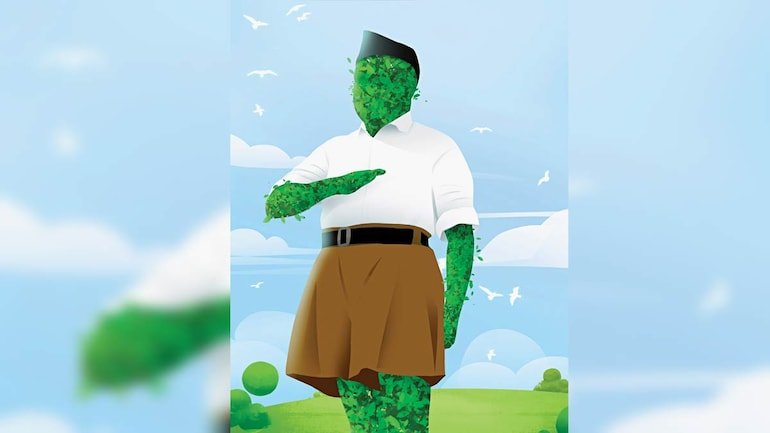 (Text of the article originally published in India Today Magazine on January 8, 2021. Views expressed are personal.)

On the new year day, Mohan Bhagwat, Sarsanghachalak of the RSS addressed a gathering of eminent citizens in Bengaluru. He was there not  to talk about Hindu Rashtra or about Hindus Muslim relations, but about  ‘Paryavaran’ – environment. Long considered an NGO domain, the RSS is now looking at it as an area of interest. A new wing – Paryavaran Gatividhi – climate activism – has been added to the roster of the RSS recently.

Not just environment, the RSS inspired NGO activism can now be found in many other areas including healthcare, education, and social welfare. ‘Saksham’ is one such NGO that works among the disabled, whom the RSS had christened as ‘Divyang’, much before the government started using that term. During the crisis months of Covid pandemic, the RSS had quietly organized extensive training programs for over a lakh of village health volunteers across the country who were given basic training by experienced doctors to tackle any future wave of the pandemic. From running primary and secondary institutions, the RSS members are now venturing into setting up universities and institutions of excellence.

Coupled with this NGO style activism is the focused effort to correct the image and perception. In the last more than a decade, the RSS has quietly increased its outreach through a new activity called Vishesh Sampark – targeted reach out. All senior functionaries including Bhagwat undertake regular initiatives of reaching out to the influencers in the society to explain the cause of the RSS. The RSS chief is reaching out to leaders of Muslim, Christian and other communities exhorting them to overcome prejudices and know the RSS from the horse’s mouth.

Extending it further, the RSS has now embarked on the task of reaching out to political, academic, intellectual, religious and social leaders in dozens of countries across the world in an effort to address the disinformation challenge and affect image makeover globally.

A new confidence is conspicuous in the once reticent organization these days. This confidence stems from the fact that the core mission that it has pursued for over ten decades – reestablishing the centrality of Hindu cultural and civilizational identity in India’s national life – has now become a reality. Hindutva occupies national centerstage today. Rahul Gandhi, senior Congress leader wants to call himself a Hindu; so is Mamta Benarjee, leader of the Trinamool Congress. Arvind Kejriwal, Chief Minister of Delhi has made budget allocation for a free pilgrimage to Ayodhya for Ramlala’s darshan for all the city’s senior citizens.

It was inconceivable a decade ago. Dominant political discourse in India’s post-independence decades was centered around secularism. Hindu, Hindutva and Hinduism were relegated to the fringes and dubbed communal. Renowned Hindu Mahasabha leader N B Khare’s description of Jawahar Lal Nehru as a “Hindu by accident” came to be identified with the mainstream polity in all these years. A false notion of secularism that got equated with rejection of Hindu identity as majoritarianism and yet pandering to minorityism in the same breath had become the dominant political discourse after independence.

That distorted notion of secularism, dubbed by many Hindutva protagonists as pseudo-secularism, has now been rejected by majority of Indians. To call oneself a Hindu is no longer a matter of hesitation or shame. Even prominent Congress leaders are writing books about Hindu history and civilization. No less credit for it should go to the RSS.

Every movement passes through four stages, Gandhi used to say – “First they ignore you. Then they laugh at you. Then they attack you. Then you win”. Many movements lose steam during the first three stages. The RSS has successfully passed through all of them and emerged as the national mainstream, overcoming ridicule and rejection. Not many organizations have survived for a century. But the RSS has not only survived but growing.

Besides more than fifty thousand Shakhas, the RSS activity today spawns across lakhs of villages in the country. One barometer for assessing its spread and influence could be the recent campaign for mobilizing financial support for the Ram Janma Bhumi temple at Ayodhya. Undertaken earlier this year, thousands of RSS cadres had reached out and secured support from over 13 crore (130 million) Indians, that included people from all parties, social groups and even members of other religions like the Muslims and Christians. No other social organization can claim such an expansive reach and connect with the ordinary masses.

As it nears its centenary and embarks on a course befitting its strength as well as the need of the changing times, the organization is faced with some critical challenges. Although emerged as the fulcrum of Hindu civilizational reassertion, it is still subject to scrutiny and criticism. Its exponential growth has resulted not only in organizational spread but also in influence of its thought process, the latter many times higher than the former. In fact, the RSS outside the Shakhas is much larger than that inside. And it is not necessary that the discipline found inside can be found outside too.

That puts greater onus on the RSS leadership. Mohan Bhagwat understands it. He faced sharp criticism from that section when he talked about ‘common DNA of all Indians’ sometime ago. His original emphasis was on telling the Muslims that they were not alien to the cultural-civilizational life of this ancient nation. But when he reiterated recently that “the DNA of all the people of India from 40,000 years ago is the same as that of the people today”, it was probably his response to those angry sections, and also a likely theme for the organization in coming years.

There is widespread Hindu pride in India today, not necessarily against any other community or religion. There is also Hindu anger in some sections – a sense of persecution, genuine or otherwise – triggered by the acts like proselytism and Islamic radicalism. While pursuing its centenarian agenda, the challenge for the RSS will be to find a balance between the pride and anger, ensuring that neither spill over.