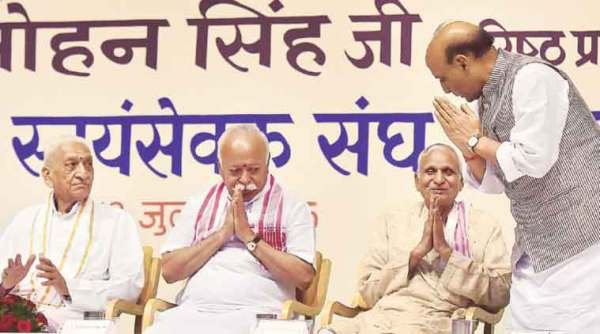 The recent three-day meet of the leaders of the RSS and its affiliates has generated a lot of curiosity and controversy. The presence of Prime Minister Narendra Modi and several of his cabinet colleagues invited extra attention and ill-informed criticism.

The RSS is a big and popular organisation. Hence, the attention and curiosity are understandable. But is the criticism warranted? Can’t organisations interact with governments in a democracy? In fact, the PM and ministers meet members of social, cultural and business organisations almost a daily routine. Then why an objection in this case?

In the eyes of some critics, the RSS is an extra-constitutional authority wielding unwholesome control over the BJP. The PM’s and BJP’s association with the RSS is well-known. The Sangh Parivar, a family of organisations, is essentially an ideological parivar.

Meetings between the RSS and BJP leaderships are not new. Moreover, this wasn’t the first time such a meeting has taken place. During the previous NDA regime too, one such three-day meeting was held in 2003. Then PM Atal Bihari Vajpayee and several ministers, including L.K. Advani and M.M. Joshi, were present. That meeting had also generated a lot of curiosity. The only difference between then and now is the vehemence.

The RSS has clarified this time that the meeting was not called to review the performance of the government, nor were ministers asked to submit report cards. The RSS leadership took extra care to ensure that the meeting didn’t turn into a forum to discuss the performance of the government. Bhaiyyaji Joshi, the RSS general secretary, had categorically told the functionaries that the objective of the meet was not to discuss the government’s functioning. The programme was structured in such a way that the ministers would speak only at the end of each session, so that the discussion didn’t turn into a review of the ministries.

Yet, some critics went to the ridiculous extent of invoking the Official Secrets Act against participating ministers. It is flabbergasting. Ministers attend so many meetings. They go home every evening and share a meal with family and friends. Does it mean they are violating the Official Secrets Act? Every party holds meetings internally and with groups affiliated to it. Ministers and prime ministers attend these meetings. It can be a working committee meeting or a meeting of the women’s wing or the youth wing or something else. Does it mean they are carrying official files to these meetings?

I am tempted to question the behaviour of the critics themselves. The Congress has a notorious history of extra-constitutionalism. During UPA 1’s rule, the joke was that the country had three PMs — the PM, a super PM at 10 Janpath, and the CPM. During UPA 2, the country got rid of the CPM while the super PM continued to call the shots. The more we go back in history, the uglier the extra-constitutional activity becomes.

Congress members themselves have written about how the extra-constitutional authority wielded unquestionable powers in those days. Let me quote what Natwar Singh, a senior Congress leader, wrote in India Today in February 2014: “My diary entry of May 13, 1995 reads: P.V. ‘Where are you, come over.’ I arrived at 7 Race Course Road at 8.40 pm. Around 9 pm P.V. walked in. He did not sit down. The normally imperturbable P.V. appeared flummoxed and agitated: ‘I have just received her letter to me?’ I said I had not seen it. The two were apparently having an epistolary war regarding the trial of Rajiv Gandhi’s assassins. What P.V. said next was so unexpected that I was dumbfounded. ‘I cannot take her on. I could. I don’t want to. What does she expect me to do?’ ‘Why don’t you see her?’ I said. ‘How often do I see her? It is a question of my self-respect. Her attitude is affecting my health. How many times do I have to be insulted’…”

Sonia Gandhi was not even the Congress president at that time. In fact, P.V. Narasimha Rao was. The hatred of this extra-constitutional authority, for Rao, was so deep-rooted that when Rao passed away, his body was not even allowed into the Congress party headquarters. It was kept at the gates for just 20 minutes “to pay homage”. He was not allowed a cremation in Delhi. Rao happens to be the only PM for whom there is no memorial in Delhi. Even Sanjay Gandhi has one.

Returning to the RSS-BJP equation, it is important to understand the relationship in perspective. Walter Andersen, co-author of the book The Brotherhood in Saffron, had once made an interesting comment: “The RSS is very difficult to understand and very easy to misunderstand.”

There are two distinct models in the world with respect to the management of a political party. One is the British Labour party model, where the labour unions used to guide the party leadership. Two, there is the Communist Party of China model, in which the party controls everything, including the government, labour unions, cultural bodies, etc. Looking at the RSS from the point of view of either of these models will be a mistake.

The RSS model is unique. It has a Parivar of 40-plus organisations. The RSS is their ideological fountainhead. Contrary to perception, the RSS neither controls nor commands them. In a very Indian familial way, they come together occasionally to discuss and exchange notes. There are a few issues that are dear to the RSS’s heart — national security (that includes Kashmir and the Northeast), economy (especially in the light of Swadeshi), social harmony (that deals with SC and ST welfare issues) and education (with focus on values, etc).

These issues form the core agenda in all such meetings. BJP leaders, whether in power or out of it, attend these meetings essentially to share their views on these issues. The recent meeting was no different. The ministers did share their views. Did it satisfy all the organisations? That’s difficult to say, since 100 per cent satisfaction is never possible.

But yes, as someone who has seen so many such meetings in the past, I can confidently say that the ideological family went home content with the general direction of the country under the new government. That is probably the best news for this government — a thumbs-up at home.
– See more at: http://indianexpress.com/article/opinion/editorials/a-family-gets-together/#.VfeEu8a13w8.twitter